Once the process of gum printing becomes comfortable you may consider using other techniques to render your final prints. Gum bichromate prints tend to obscure 2/3 of an image's detail, loosing shadows and highlights. While a novelty at first for your images, and certainly a harmful alternative appearance with an aesthetic quality all its own, the gum bichromate process is capable of so much more than the gimmick of its most basic use. In order to explore further, it helps to make use of several techniques to be covered in the following sections.

Before going any further I will cover a few fundamental concepts about images. 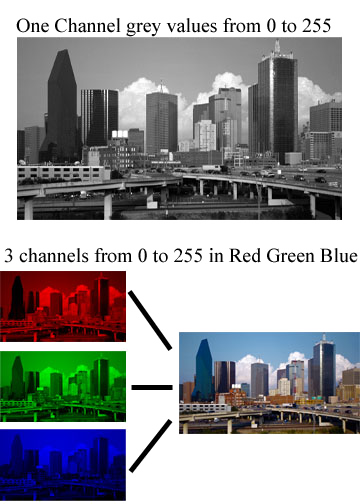 A digital image file is made up of pixels, they are the tiny squares of color you see if you zoom in really close to a digital picture. Each pixel is actually a piece of digital information specifying where it is in the image and what color it is. All we are concerned with is the value of the pixel, or how dark or light it is.

In a computer a black and white image is a one channel image. Typical digital images have 256 levels of gray pixels per channel. The brightness of pixels goes from black to white with each value of gray specified by a number. A pixel value of 0 is black, 255 means white, and 128 or so means middle gray. (note that computers start counting at 0 not 1, so 255 is the 256th value)

Color images on the other hand have 3 channels, opposed to the 1 channel that a black and white image contains. The three channels of a color image are red, green, and blue, each channel containing 256 levels of value, meaning there are 256 x 256 x 256 = over 16 million colors of pixels in typical color digital images!

Our eyes are able to distinguish even more levels of value from the real world, perhaps several thousand! But 256 levels does just fine for display on things like monitors and printed images.

Scale is a description of how many values of gray an image can show and it is often described in terms of being 'long' or 'short'. A short scale has very few levels of gray between black and white. The shortest scale you will ever see is a two color image made of solid black and solid white. Xerox photocopies have very short scales to give you an idea. An image containing all the values of gray would have a long scale. Sometimes long scales are referred to as 'full' scales because they contain all the levels of gray between black and white.

Instead of always thinking of a scale with the numbers 0 - 255 like a computer, it helps to think of the values in something more familiar: a percentage. The percentage represents the amount of black. 100% is total black, 50% middle gray, 0% is white. The image below illustrates a scale divided into 2% increments.

A full scale of grays in 2% increments

On our our computer monitors, black displays at 100% darkness and white displays at 0% dark. In other words the full length of the scale is displaying correctly (if your monitor's settings are set correctly). However, gum bichromate printing only renders a short scale. If we were to print this full scale exactly as it is onto a transparency, and use that as a negative for a gum print, in our print we would loose a great portion of the full scale. Since the gum printing process prints only a short scale, we loose many dark and light grays to end up with a very short scale. Keep in mind that the values will reverse when printing anything in gum bichromate. Black becomes white.

In the above example, we see that the high contrast of the gum caused us to loose about 2/3rds of the information on our negative and in our image! Everything in our negative darker than 70% black is washed to white and anything lighter than about 35% is exposed completely. Below is a simulated example of an image loosing all of that detail in the printing process. You can see the buildings become over exposed and much of the detail in the sky is lost.

When an image is printed where there is a loss of information in the highlights and shadows, you call that a high-contrast image. The high contrast effect of gum printing is not a bad thing! In fact it is one of its many strengths. If you wanted to bring more detail into the image above you could either under-expose the print and reveal more of the buildings, but less of the sky detail. You could also over-expose the print and get more detail in the sky if you wished.

To combat the high contrast of gum printing we can compress the full digital image scale of 0% to 100% into a shorter scale keeping most of our image from washing off into the sink or over exposing. The example below is theoretical and serves as a demonstration only. Actual values would need to be measured. 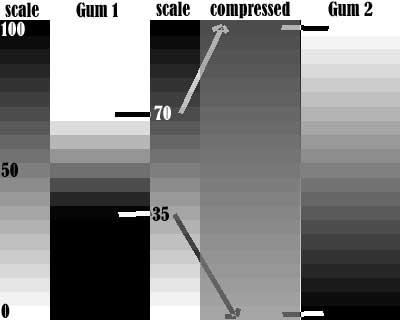 Preview of the calibration process

The image above gives an overview of the theory from left to right. On the left, we start with our full scale of values from 0%-100%. Pretend this scale is printed on transparency film as is and is then printed in gum bichromate. As we have seen previously, the high contrast short scale of gum printing will cause you to loose 2/3 of the full scale. The shadows become over exposed and the highlights are lost. All that remains are the few values in the middle. This is represented in the next column as "Gum 1".

Note that under "Gum 1" the gum layer values become white at about 70%, and become black at about 35% when compared to our full scale. We now know the endpoints of our short scale and can use this information to compress the values of our images so that the full scale of their values maps to the short scale that can be printed.

We then take these numbers and plug them into Photoshop's 'Curves' or 'Levels'. this lightens all 100% black values to 70% and lowers all white values to 35%. Every value between is calculated to correspond. You end up with a very low contrast scale in your image, depicted under the column 'compressed'.

Theoretically, if you were to now print this low-contrast scale in gum bichromate, the high-contrast of gum bichromate would increase the contrast in your print to a full scale! This is depicted under 'Gum 2' in the image above.

I started with the above idea in 2004, and found it works somewhat well in theory and in practice up to a point. THis technique works well for processes like cyanotype, but for gum bichromate unforeseen factors do come into play altering the expected results.

For one thing this example assumes gum printing techniques always print a linear scale, which almost always they do not. This results in images printing much darker than you would expect. Also, compressing the values of a full scale actually does cause a loss of information. In the above example, you are taking 256 individual shades of gray and squashing them into only about 90 values of gray. This still causes you to loose about 2/3 of the image values, however the loss is evenly distributed between all the values rather then loosing all the high tones or low tones. This kind of image loss is called pasteurization and can sometimes leave behind banding effects in areas of smooth and slowly changing colors like you would find in a sky.

I have developed ways of dealing with those factors which have proven successful. And so we shall continue on...